With lots of people stressing about backpacking reservations in BC, you might feel like you have to book backcountry camping months in advance if you want to go on a trip. But that’s totally untrue – there are tons of places to go backpacking in BC without reservations.

I’ve been backpacking in British Columbia for almost 20 years and have done dozens of trips, most of them without reservations. I know that sometimes it’s just not possible to plan ahead – you want to wait for good weather, plans change, or you didn’t get that coveted reservation.

Don’t worry! In this guide to backpacking in BC without reservations, I have all the info you need to plan a last-minute trip including:

This is a sensitive wilderness area. Learn how to Leave No Trace to keep the wilderness wild. Make sure you are prepared by bringing the 10 Essentials. Get ready for adventure with this checklist of things to do before every hike.

Hey there: Some of the links in this post are affiliate links, which means I earn a small commission at no cost to you. Thanks for your support. -Taryn

BC Backpacking Trips That DO Require Reservations

National Parks in BC That DO Require Reservations

Provincial Parks in BC That DO Require Reservations

Most Provincial Parks in British Columbia do NOT require reservations. However, there are five exceptions. These are all very popular provincial parks.

Popular Recreation Sites in BC That DO Require Reservations

So far, only two recreation sites under the jurisdiction of Recreation Sites and Trails BC require reservations. Both are very popular destinations:

Backcountry Huts That DO Require Reservations

There are several dozen backcountry huts in BC. Most are administered by a park or by a club and require reservations. See individual hut websites for info on reservations. Read my guide to Backcountry Huts in BC for more info.

Where to Go Backpacking in BC Without A Reservation

There are literally hundreds of places to go backpacking in BC without a reservation. These can be divided into places in BC Parks that have Backcountry Permits and those without. Not clear on the difference? I’ll explain to you!

Backcountry Permits at Provincial Parks in BC

There are tons of backcountry campsites in BC Parks that don’t require backcountry permits or reservations. There are also hundreds of BC Recreation Sites and informal campsites on Crown Land. These sites are free and you don’t need a reservation or a permit.

Below, I’ve got a list of my recommendations of places to go backpacking without backcountry permits, as well as tips on how to find even more backpacking destinations you don’t have to book in advance. 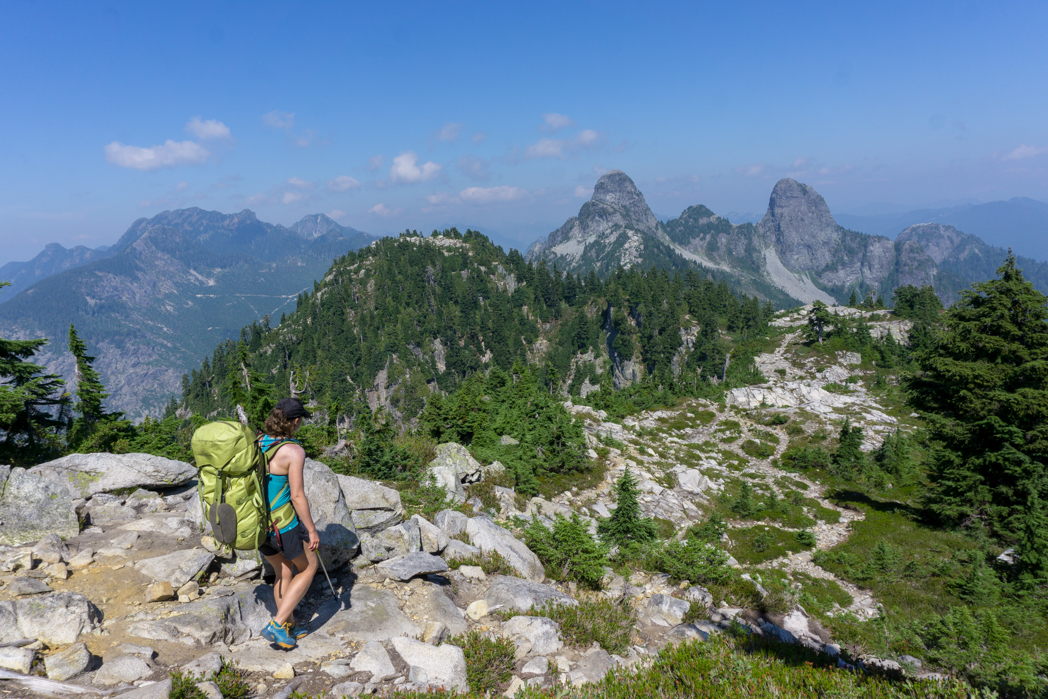 BC Backpacking in Your Inbox!

Sign up to receive a bi-monthly newsletter from Taryn at Happiest Outdoors stuffed with the latest on backpacking in BC including:

You have successfully signed up for the Backpacking in BC newsletter. Go check your email to read your welcome message!

Best Places to Go Backpacking in BC Without Reservations

As you might realize by now, there are loads of places to go backpacking in BC without reservations. It’s impossible to list them all here. Instead, I’ll give you a list of a few dozen that I recommend. I’ve backpacked quite a few of these, but lots are still on my some-day list. Some of these trips require backcountry permits.

Southwestern BC Backpacking Trips Without Reservations

Note: The trips in this section are all in my book, Backpacking in Southwestern British Columbia.

READ NEXT: 24 Easy Backpacking Trips In BC For Beginners

Interior and Eastern BC Backpacking Trips Without Reservations

Northern BC Backpacking Trips Without Reservations

British Columbia has thousands of trails and hundreds of backcountry campgrounds. And if you’re willing to go without facilities like toilets and bear caches, there are even more places to go backpacking. (But if you go that route, brush up on the Leave No Trace principles first!)

Be sure to check if camping is allowed at the park or trail before your trip. In some environmentally sensitive areas and popular destinations, backcountry camping is not allowed or is restricted to established campsites.

Here are some ways to find even more places to go backpacking in BC without reservations:

Visit the BC Parks website to find a list of BC Parks. Or use the map view to find ones in your area. You will need to click through to the individual parks pages to find info on whether there are places in that park to go backpacking or not.

The BC Parks websites aren’t very well organized, so this info can be a bit tough to find.

Tip: Scroll down to the “Facilities” section and then see if there is a “Walk-in/Backcountry/Wilderness Camping” section at the bottom.

You can also check the “Activities” section and read the information about hiking trails in the park.

Lastly, also check the “Maps and Brochures” section to view a park map that may show backcountry campsites.

Check Recreation Sites and Trails BC

Many people aren’t aware that there is a separate set of campgrounds and hiking trails besides those inside BC Parks. They are administered by Recreation Sites and Trails BC, a separate government agency. These sites are usually much more basic, have little to no funding, and are often maintained by local volunteer groups and clubs.

They also have a map that shows the location of recreation sites and trails. Keep in mind that many of these sites are drive-in campsites on logging roads. You can also use their Search by Activity page to find sites with camping and hiking, which might help you find backpacking destinations. You can also filter by region.

The info on these rec site listings is really basic and often isn’t enough to plan a trip so you will likely need to consult some of the other sources below.

Use a Hiking Guidebook

Hiking guidebooks are a great way to find curated information on hiking trails. You can be sure that the author actually hiked the trail and collected all the info you need to plan a trip.

Unfortunately, there aren’t many guidebooks that cater to backpackers. However, I’ve got a few British Columbia-specific guidebook suggestions for you:

The British Columbia outdoor community has several great Facebook groups where members share info on their hikers or post questions asking for help finding hikes. Most of the groups are full of beginners and focused on day hikes, but a few are good for backpackers.

Most hiking and mapping apps aren’t great at isolating day hikes from backpacking trips, especially when a long day hike has a backcountry campground and can be done over two or more days. However, it is worth checking these apps to find backpacking trips.

In All-Trails, narrow down the region you are looking in, then filter by activity to select backpacking.

In Gaia GPS turn on the public tracks overlay to see where others are hiking. You can do the same thing with the heat map in Strava.

Tips for Backpacking in BC Without Reservations

Once you’ve chosen a backpacking destination, there are a few things you should keep in mind when backcountry camping without a reservation.

Check to make sure camping is allowed. Find out which jurisdiction the trail or campground is in (Parks Canada, BC Parks, Recreation Sites and Trails BC, other local parks) and see if there are any rules about camping or if you need to pay fees or get a Backcoutnry permit.

Popular spots can get very busy, especially on long weekends. If possible, plan to arrive on Thursday or Friday rather than Saturday and get set up camp by early afternoon.

If you are in a group with more than one tent, try to fit two or more tents on each tent platform or tent pad so you leave room for others.

Some campgrounds have overflow campsites, but many do not. That means that in some places you might have to hike to another campground or return to the car if there isn’t room for you. When choosing an overflow campsite, pitch your tent on bare dirt, rocks, or snow. Avoid fragile vegetation.

If the campground has a food cache or hang it may get full, especially on weekends. Cache your food early in the evening or be prepared to construct a bear hang in a tree. You can also carry a bear canister or Ursack instead.

Trailhead parking lots can fill up and some are prone to theft. Arrive early to get a spot. Do not leave valuables in your vehicle.

Check trail and road conditions. Less popular destinations require little to no maintenance. Some roads require 4WD to access. Trails may be storm damaged or impassable. Backcountry campground facilities like toilets or bear caches may be missing or damaged.

Read through my list of things to do before every hike for a great checklist to get you prepped to go backpacking.

So that’s everything you need to know to go backpacking in BC without reservations. Do you have questions about planning a backpacking trip in BC? Leave them in the comments.

Guides for BC Backpacking Trips Without Reservations:

BC Backpacking in Your Inbox!

Sign up to receive a bi-monthly newsletter from Taryn at Happiest Outdoors stuffed with the latest on backpacking in BC including:

You have successfully signed up for the Backpacking in BC newsletter. Go check your email to read your welcome message!

... and I'm Happiest Outdoors. I’d rather be hiking, backpacking, or exploring back roads.

Join me as I share my adventures and empower you to feel as comfortable in the outdoors as I do.