The Glorious Mountains of Vancouver’s North Shore: A Review 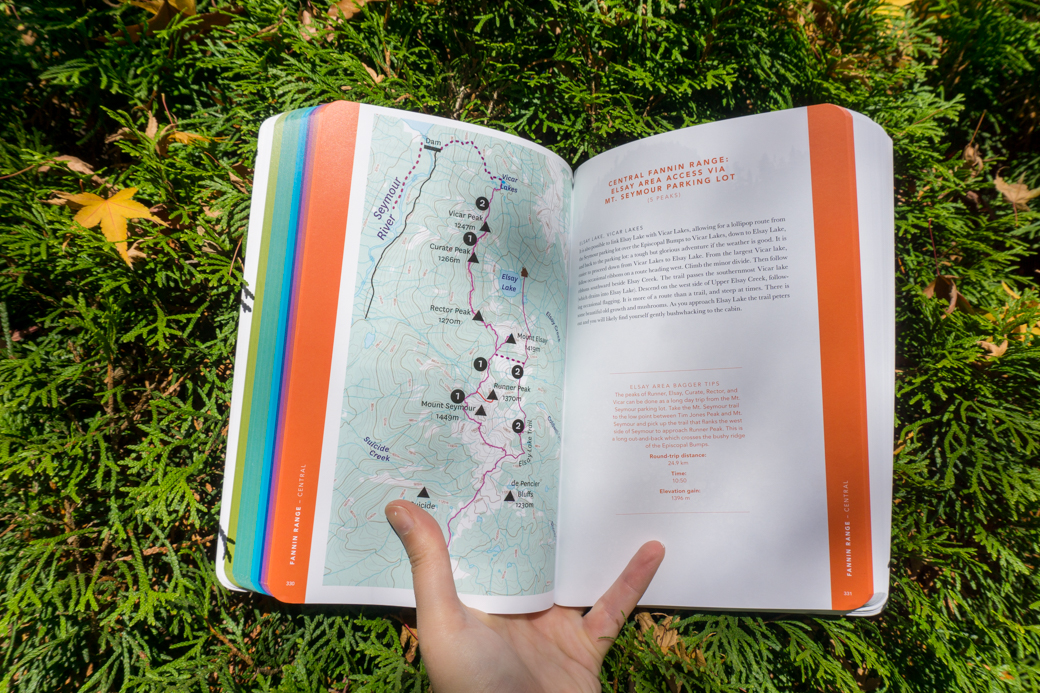 Many people don’t know this about me, but I collect guidebooks. I own several hundred of them! They date from the 1960s to present and are mostly focused on southern British Columbia. So of course I get excited when a new guidebook is released. I was especially excited when I heard about The Glorious Mountains of Vancouver’s North Shore: A Peak Baggers Guide by David Crerar, Harry Crerar and Bill Maurer. It’s not just that it’s a new guide book. It’s also a whole new KIND of guide book! This isn’t exactly a hiking guidebook and it isn’t exactly a scrambling guidebook either. It’s both. And something else too?

Basically, The Glorious Mountains of Vancouver’s North Shore provides directions for summiting 67 peaks on Vancouver’s North Shore – all without the use of rock climbing gear. Some of the routes are hikes, some are an easy walk, some are scrambles and some are hideous off-track, bushwhacking, route-finding missions. And the book doesn’t just have route descriptions in it. It also has probably the most detailed history of outdoor activity in the North Shore mountains ever printed. Oh and did I mention it’s a beast? This thing clocks in at 503 pages! I’ve been poring over this book since I got, so here’s my honest review.

Format: Paperback with lots of full colour photos and maps . Also available as an eBook

Where to Buy: Amazon.ca, Amazon.com, Indigo

READ NEXT: 103 Hikes and 105 Hikes: The History of Hiking Guidebooks in BC

What’s in the Book?

The Glorious Mountains of Vancouver’s North Shore includes info and route descriptions for 67 peaks. Most peaks include multiple route options. Each peak also includes a topo map, a brief section on name origins, First Nations history, geology, first ascents and other historical trivia. Many of the peaks will be familiar to casual hikers (e.g. Mount Seymour, Hollyburn), but others were new even to me (e.g. Zinc Peak, Mount Jarrett).

The peaks are separated into 7 mountain ranges or groups stretching from Howe Sound and Furry Creek in the West to the Fannin Range around Mount Seymour in the East. There are also some great suggestions for trips that combine multiple peaks. The section on the Howe Sound Crest Trail is particularly detailed. I actually carried photocopies of some of that section on my trip on the HSCT this August and found them really helpful.

At the end of the book there are a staggering 24 separate appendices covering all manner of interesting topics including:

READ NEXT: 15 Unusual Hikes Near Vancouver

What is the “Bagger Challenge”?

Vancouver’s trail runners and hikers have been forging their own routes to the North Shore peaks for years. In 2009 David Crerar organized the first formal “Bagger Challenge” – an annual contest to summit as many North Shore Peaks as possible in a calendar year. Since then, the Bagger Challenge has grown from a small group of friends to a Facebook group with hundreds of members. Each challenger reports their peaks bagged on the honour system and at the end of the year trophies are awarded for the champions of each gender, a kids division, a canine division and a spirit award. I haven’t formally participated in the Bagger Challenge yet, but I have been keeping up with the fun discussion in the FB group. (And I’ve also privately noted my own peaks bagged. I’m at 22 in my lifetime and 10 in 2018. Curiously, the book doesn’t have a tick list page where readers can keep track of all the peaks they’ve bagged.) Maybe next year you’ll see my name on the official baggers list though?

You don’t have to be a dedicated member of the Bagger Challenge to enjoy the book. (Although, like me you might be planning some future peak bagging trips based on the books instructions!) I think the following types of people will love this book: those that like off-the-beaten-path hikes, people interested in local history, hikers looking to make the jump to scrambling, and anyone who wants to take their North Shore hikes to the next level but isn’t ready to learn roped climbing. This book is sure to spark some trip-planning ideas for many Vancouver-area hikers! I’m already dreaming of an overnight trip deep into the Fannin range behind Mount Seymour next year!

I received a complimentary review copy of this book. However, all opinions are my own, and honestly I would have purchased this book with my own funds if I hadn’t been given a copy.

Have you got your copy yet? Which peak from the book is now on your must-hike list? Tell me in the comments.