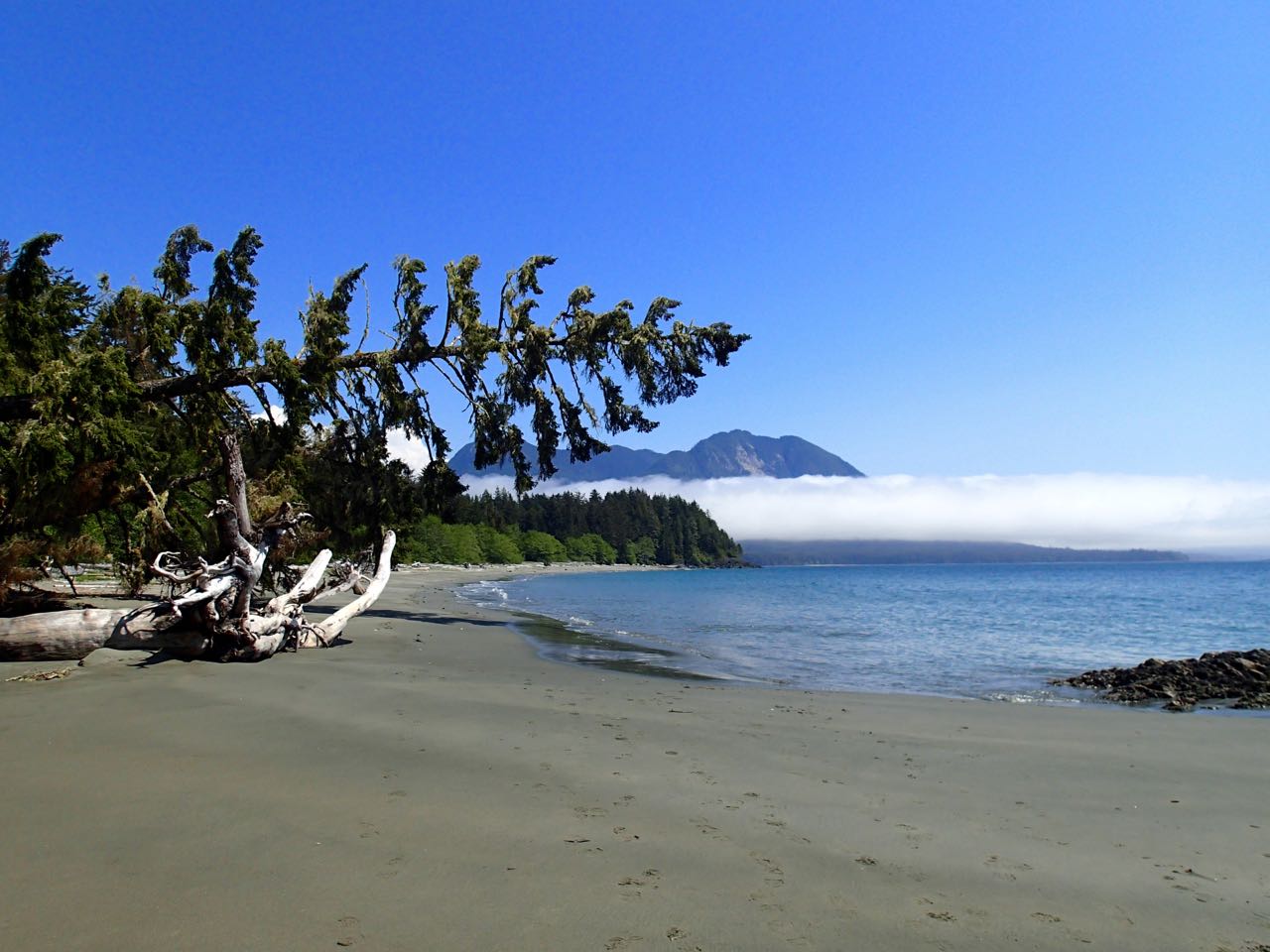 Don’t get me wrong, I love being high up in the mountains, but there’s something magical about coastal hiking: The scenery is totally different, the changes in elevation are minimal and its nearly impossible to get lost.  Nearly every year I try to do a coastal backpacking trip.  I’ve done most of the more popular trips (like the West Coast Trail and Juan de Fuca Trail) so I’m always looking for new places to discover.  This year I was part of a group of 8 friends who headed to Flores Island north of Tofino, BC to Wildside Trail (yes, that’s the name of the trail!)

The Walk the Wildside Trail is 11 kilometers of beach hiking, trail and board walk from the tiny First Nations village of Maaqtusiis (also spelled Marktosis and sometimes also called Aahousaht) to a beautiful sandy beach at Cow Bay in Flores Island Marine Provincial Park.  The local Ahousaht First Nation has developed the trail as an eco-tourism project and the Wildside Trail office staff were super helpful with planning our trip.

Even though the trail is only 11 kilometers each way, we chose to spend 3 days on the trail to really enjoy the area.

We started our first day by boarding a water taxi at the dock in Tofino.  Our little boat sped north through lots of small islands, passing tall mountains rising into the mist, little pocket beaches and some sea lions swimming circles.  Before long we arrived at the main dock in the village of Maaqtusiss where Travis from the Wildside Trail organization was waiting to meet us.  Travis walked us through the village to the trail office where we paid our fees, received our trail maps and got a briefing about the trail.  Travis even walked us right up to the trailhead where he had us pose for a group shot for the trail’s Facebook page. 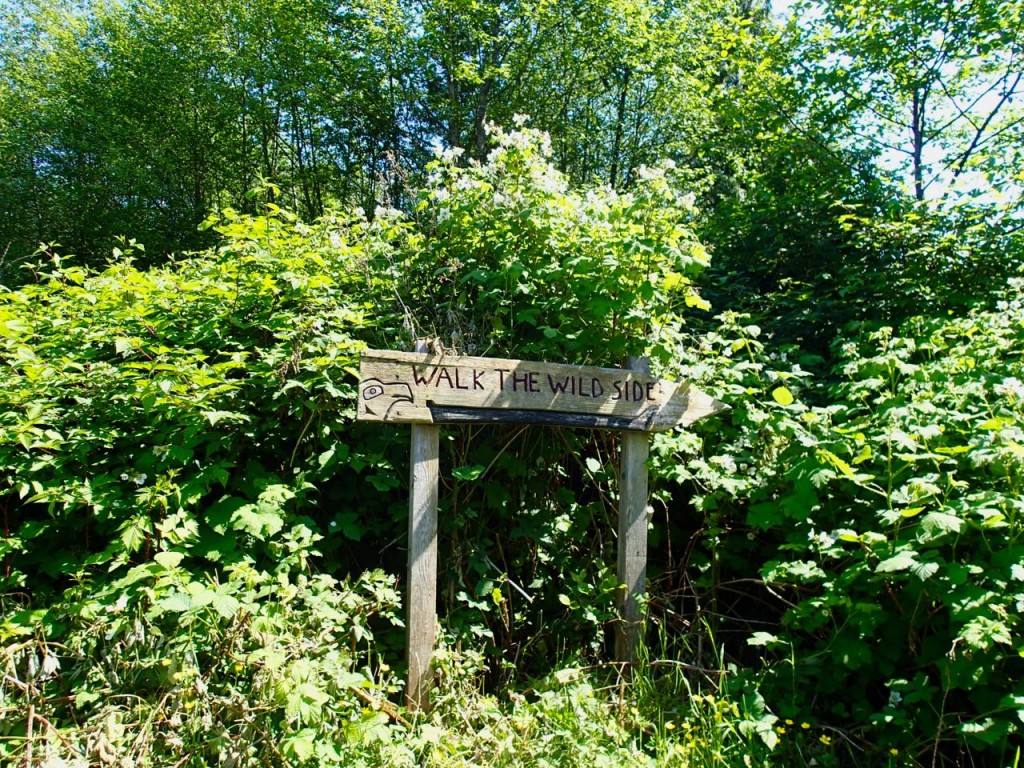 Trailhead sign at the start of the Walk the Wildside Trail

The first few hundred meters of the trail runs through raspberry bushes, salal and a marsh roughly paralleling one of the roads through the community before turning into a new subdivision for a couple of blocks.  After about a kilometre of walking we reached the first beach and since it was about 1pm, we promptly sat down to have our lunch. This beach, called First Beach, sits right in front of the subdivision and was fairly busy with locals and visitors out for weekend walks.

After lunch we walked headed off into the forest on the first of the inland trails that connect the beaches.  Each trail is marked with fishing floats hanging in the trees.  The inland trails on the first few kilometres of the trail feature extensive boardwalk sections.  Most of the boardwalks are original to the late 1990s trail construction so they are weathered and mossy.  They are made of hand split planks (rather than 2x4s) and are often constructed in a whimsical manner with lots of curves, ramps and natural branch railings. 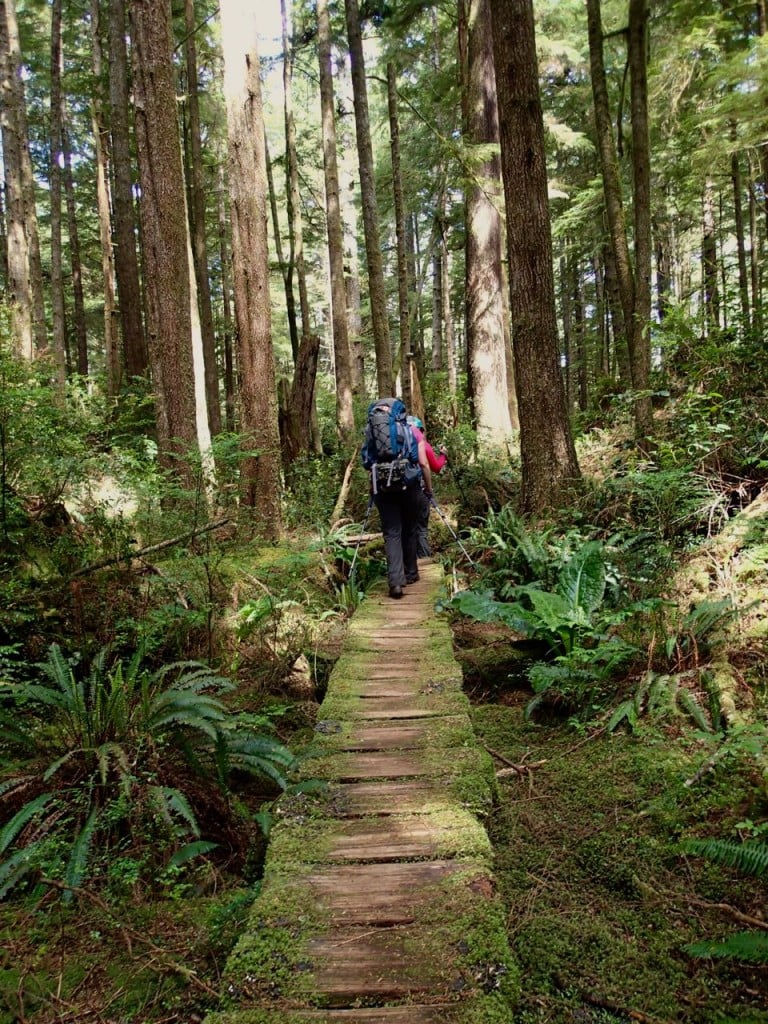 Boardwalk on the Walk the Wildside Trail

After a few inland trail sections and some long beach sections including Second Beach with its sand dunes and campsite and long sandy Whitesand Cove, we crossed Kutcous Point on an inland trail and arrived at the Kutcous River crossing.  The river is tidal and can only be crossed at its mouth at lower tides.  If the tide is high you can take a side trail about a kilometer inland to a bridge.  The tide was not low when we arrived and we weren’t sure what we should do as the water looked deep.  However, M changed into his swim suit and bravely plunged into the river to test it out (also he loves swimming).  He had soon found that if we headed a couple hundred meters up stream we could ford the river and only get wet to the knees.  We had to scramble over rocks on the other side of the river bank to regain the trail but it was definitely shorter than taking the high tide route inland. 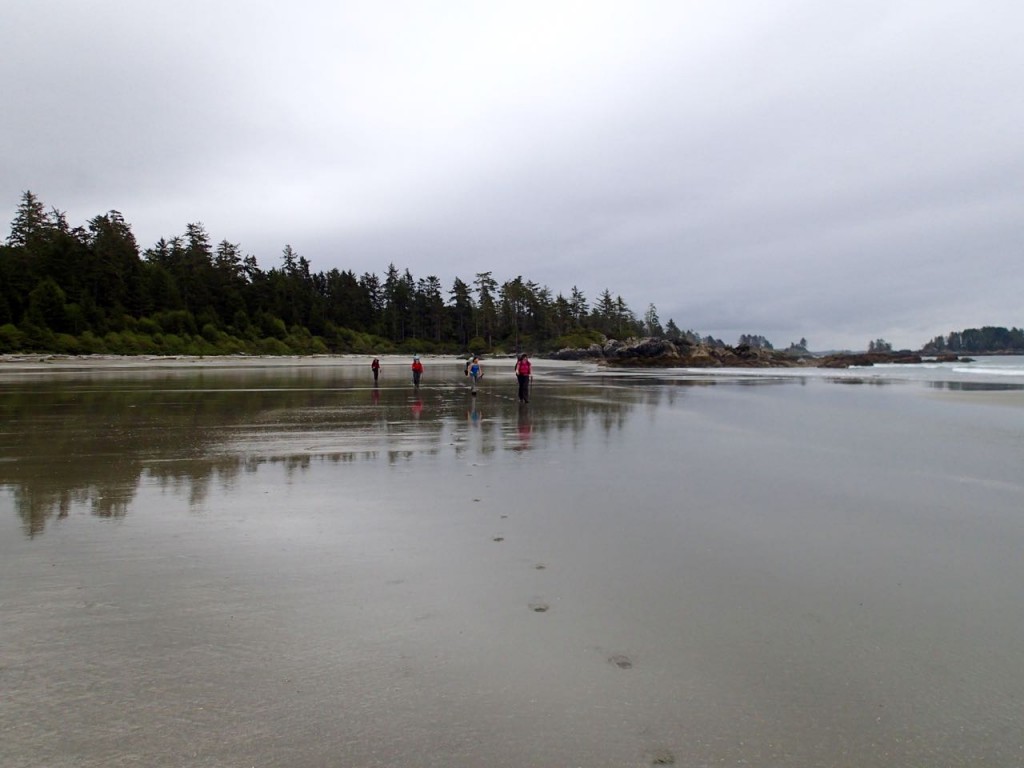 Beach walking on the Walk the Wildside Trail

After the river crossing we had a bit more inland walking and passed by the trail’s emergency shelter: an old hippy cabin with a sleeping loft.  Soon we were back to beach walking with a few short inland trail patches to bypass headlands between pocket coves.  Finally we reached the last inland section, crossed a river on a long and ancient sitka spruce log bridge and emerged onto the white sand beach of Cow Bay.

We hadn’t seen many hikers on the trail so we were shocked to discover that the popular east side of the beach (where the outhouses and food caches are) was a virtual tent city.  We wandered up and down the beach a couple times but didn’t find any good spots that were above the high tide line.  There was a large group camped at the far east end near the river mouth and we headed down the beach past their camp and discovered that the best campsite of them all was still unoccupied.  We had a large stump table, logs to sit on and best of all: a pre-rigged tarp frame made of two poles with rope strung between them.  We were also close to the outhouse, food cache and water source.  Score!

We quickly set up camp and made dinner.   We discovered that the large group next to us had all come in by power boat (cheaters!) to celebrate the 40th birthday of one of the guys.  They had a big bonfire going down the beach but over the sounds of the waves we didn’t hear them partying.

On Sunday morning I got to do my favourite thing ever: have a long sleep-in in my sleeping bag!  It was still a bit overcast and it was a rest day so there was no hurry to get moving.  We cooked up a big breakfast of egg and bacon breakfast burritos with veggies then headed off down the sand to explore Cow Bay. 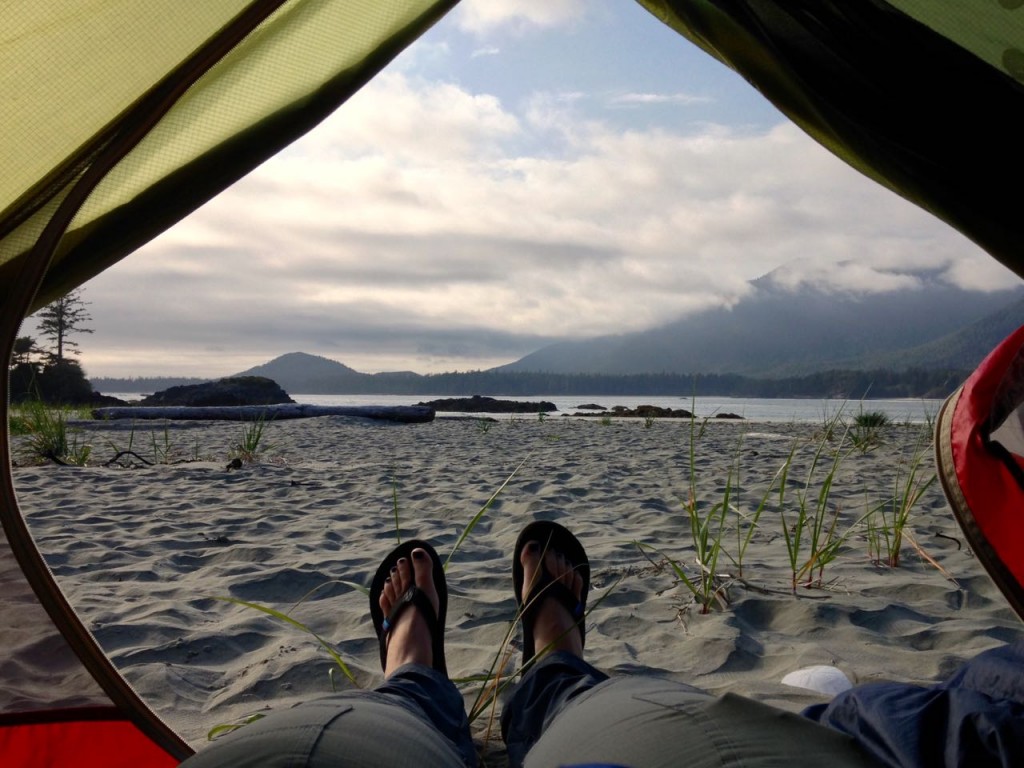 Good morning Cow Bay! The view from our tent.

Part way along the bay we discovered a very decomposed whale corpse.  We had no idea what it was, but we found out later that it made the news and perhaps is scientifically important since Cuvier’s beaked whales aren’t often found in BC. 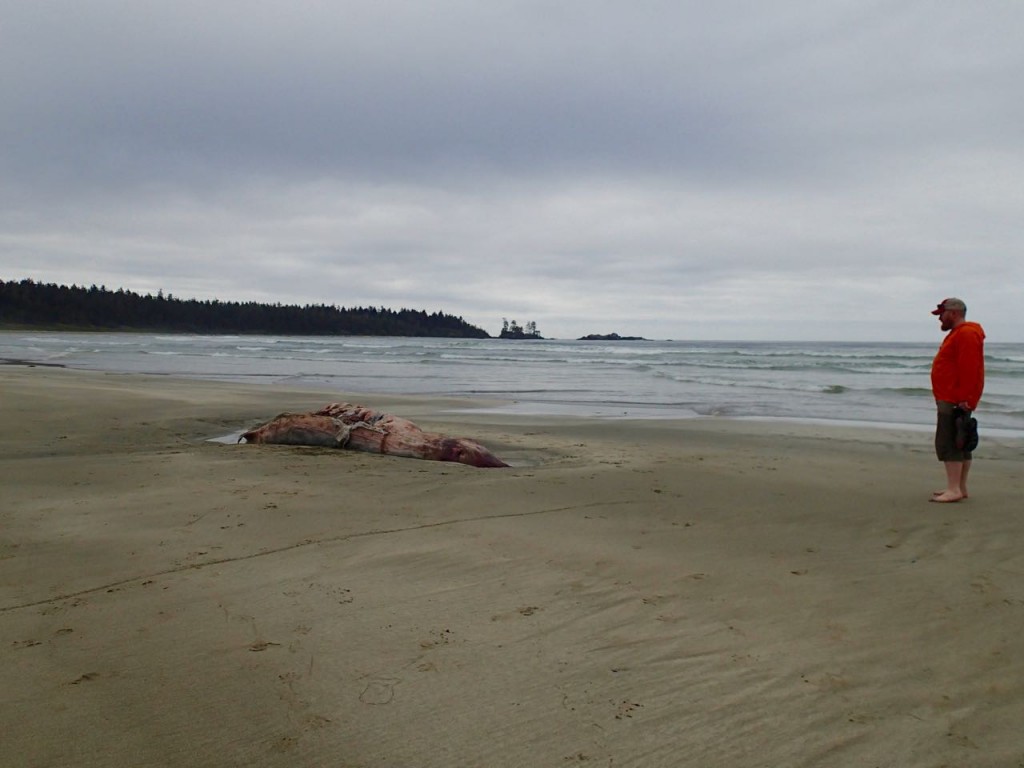 Once again the tides weren’t with us so we couldn’t find our way around some of the rock croppings on the west side of the bay to continue exploring.  We headed back to camp to lounge in the hammock and explore the rocky islands near camp.  After dinner we enjoyed a bit of a sunset (only partially thwarted by a fog bank) and then a campfire. 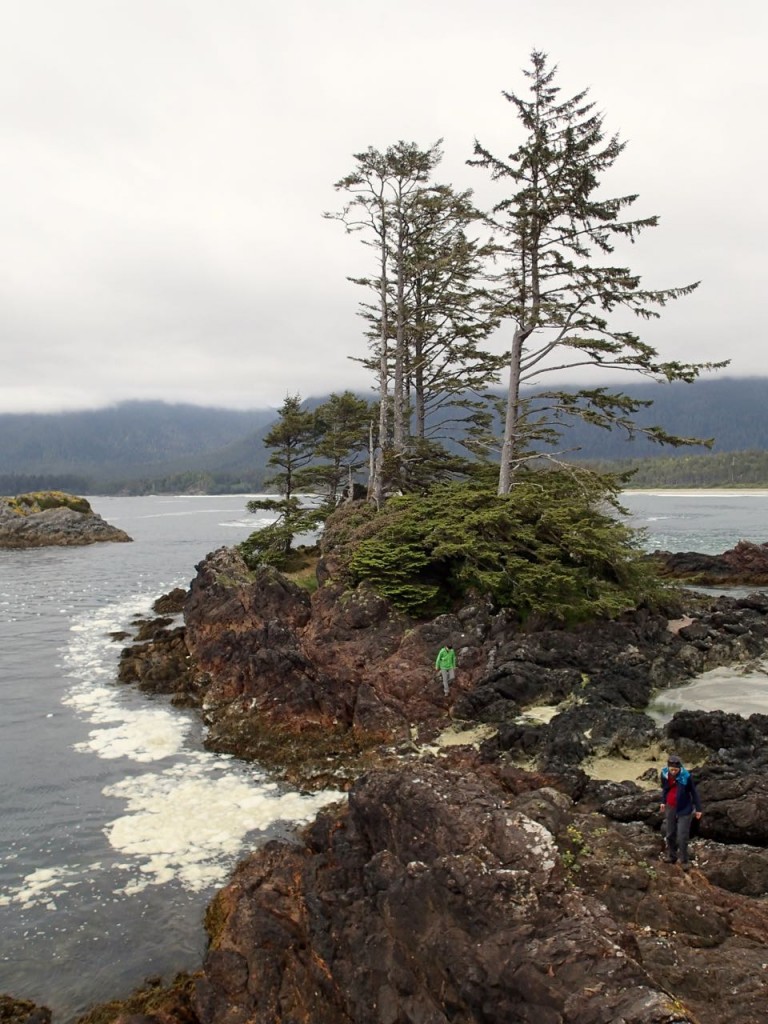 Exploring the rocks near camp at Cow Bay 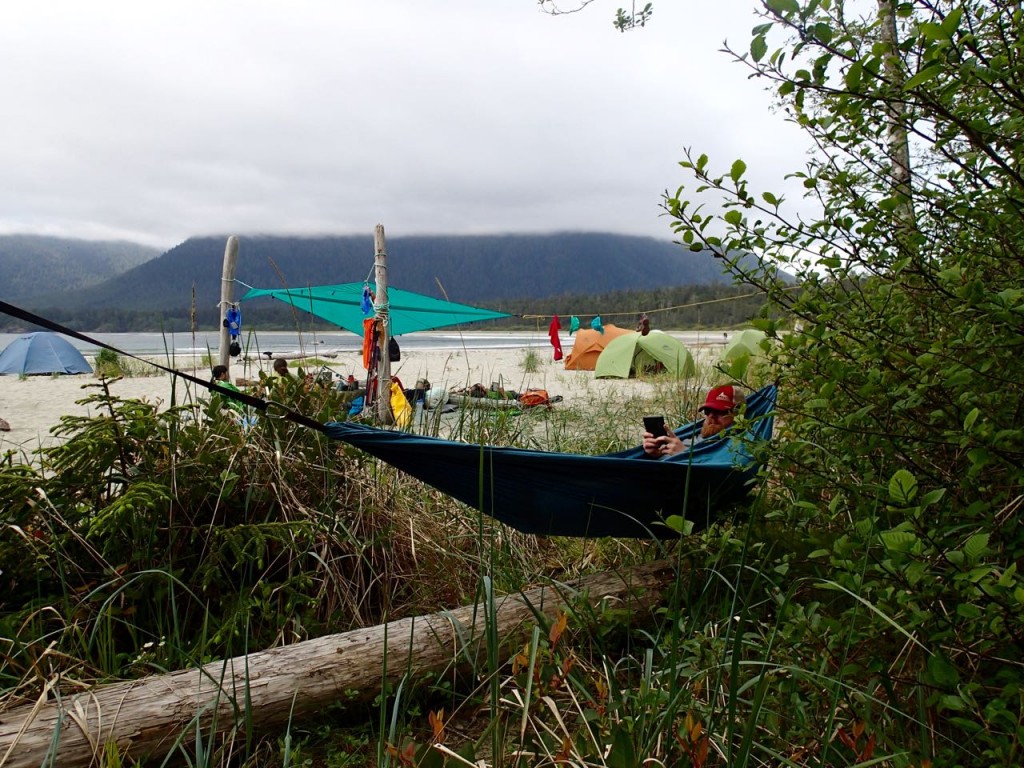 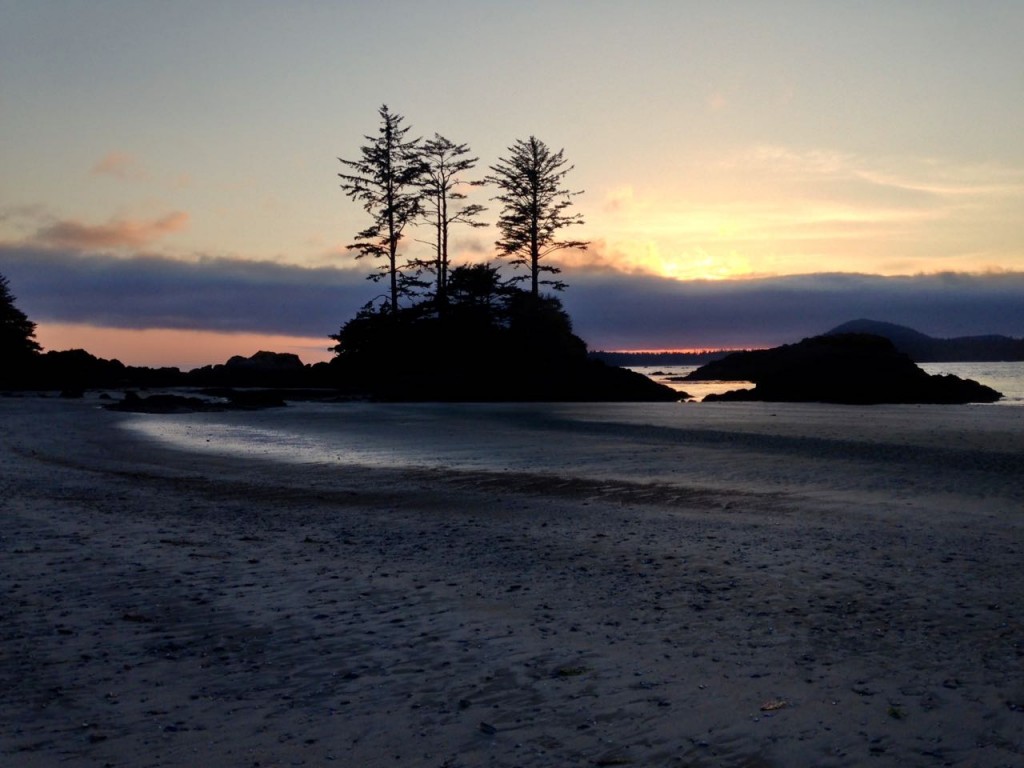 On Monday morning despite our best efforts to pack up fast and get going we were still the last hikers to leave the beach.  Like the rest of the trip the skies were grey and overcast, but the weather was turning a bit muggy.  We shouldered our packs and set off across the first few beaches heading back east towards Maaqtusiis. 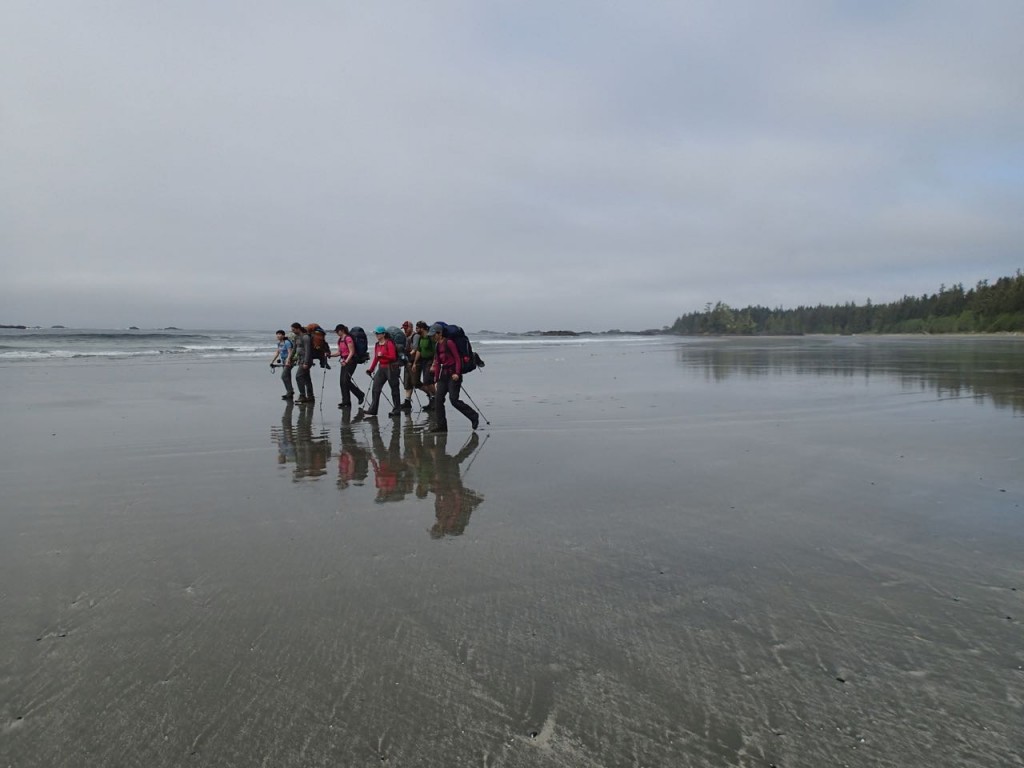 Low tide hiking reflections on the Walk the Wildside Trail

Since we knew the tides were going to be even higher at the river this time around, we chose to take the inland High Tide Shortcut trail directly to the bridge.  We had heard the trail was just cut last year and was a bit rough and that was right.  It was bushy, lumpy and bit mucky so it was slow going but not too bad considering. 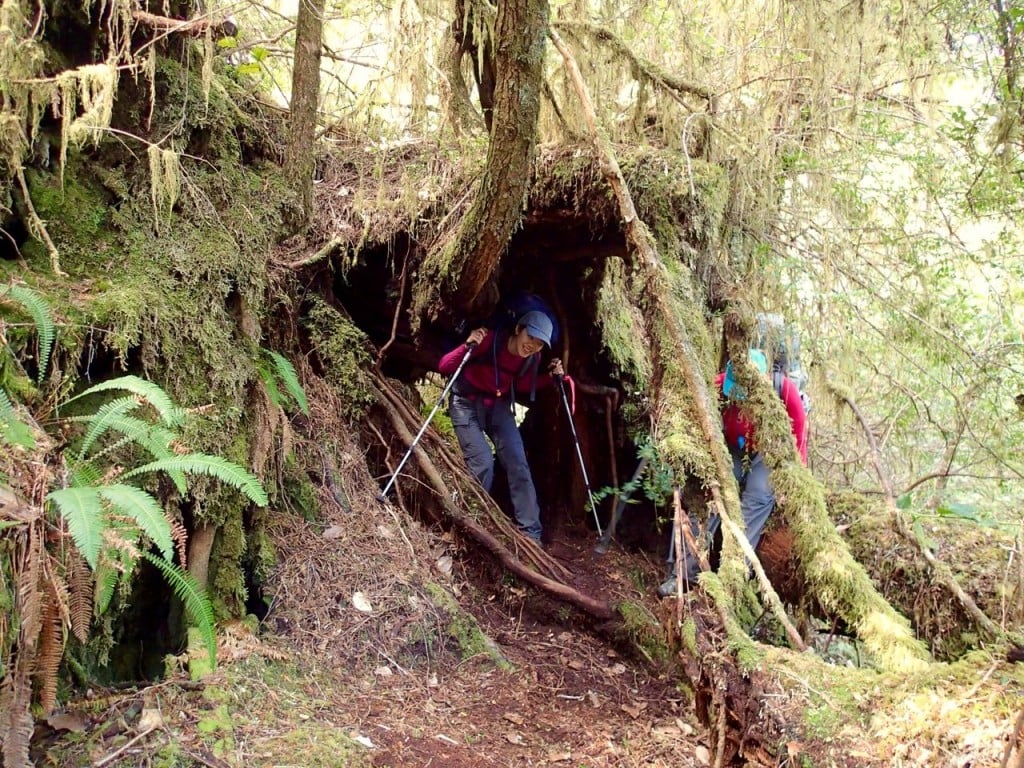 The high tide shortcut trail on the Walk the Wildside Trail is a bit rough in places.

Even though the trail wasn’t too bad, we were still excited when we reached the big metal bridge over the river and re-joined the established trail on the east bank of the river.  We passed a large culturally modified tree and a big old cedar as we walked down river back to the river mouth. 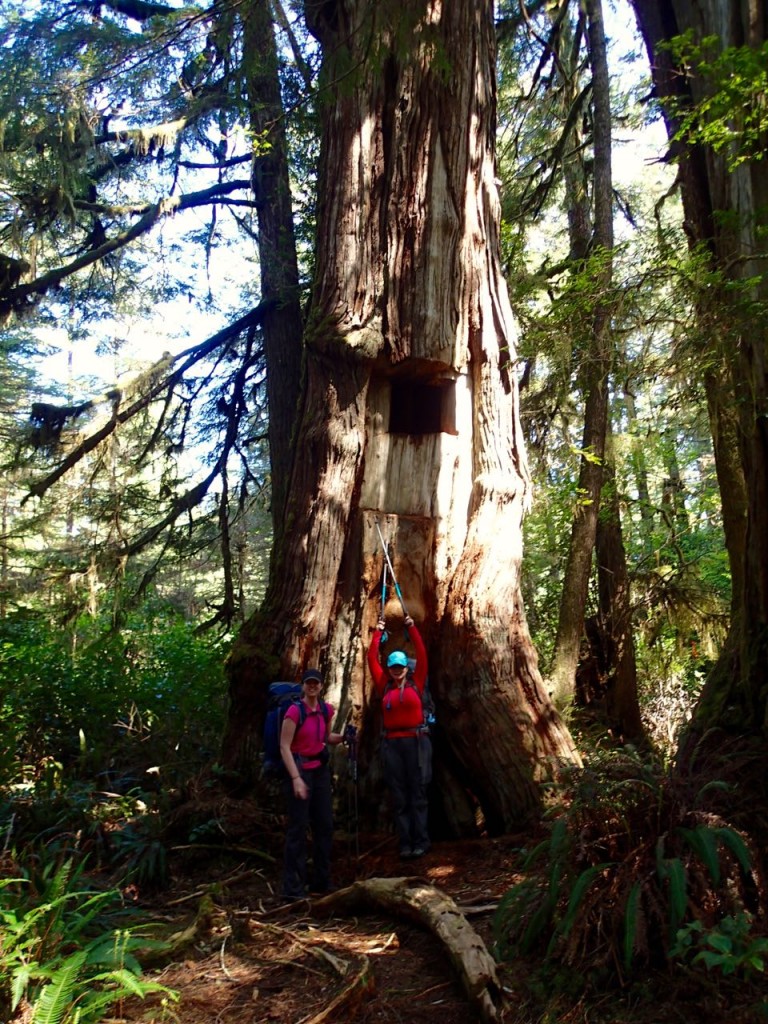 We found the culturally modified tree!

When we emerged from the forest on the beach at the river mouth the grey skies and muggy weather had vanished and were replaced by beautiful blue skies, sandy beach and a cool ocean breeze.  This is why we hike on the coast!  We dropped our packs right there and settled into the warm sand to have lunch.  We spotted a few boats off shore and quickly realized that if they were whale watching boats, there must be whales out there.  We spotted a few spouts of water and tail flukes popping up, but without binoculars we couldn’t see much. 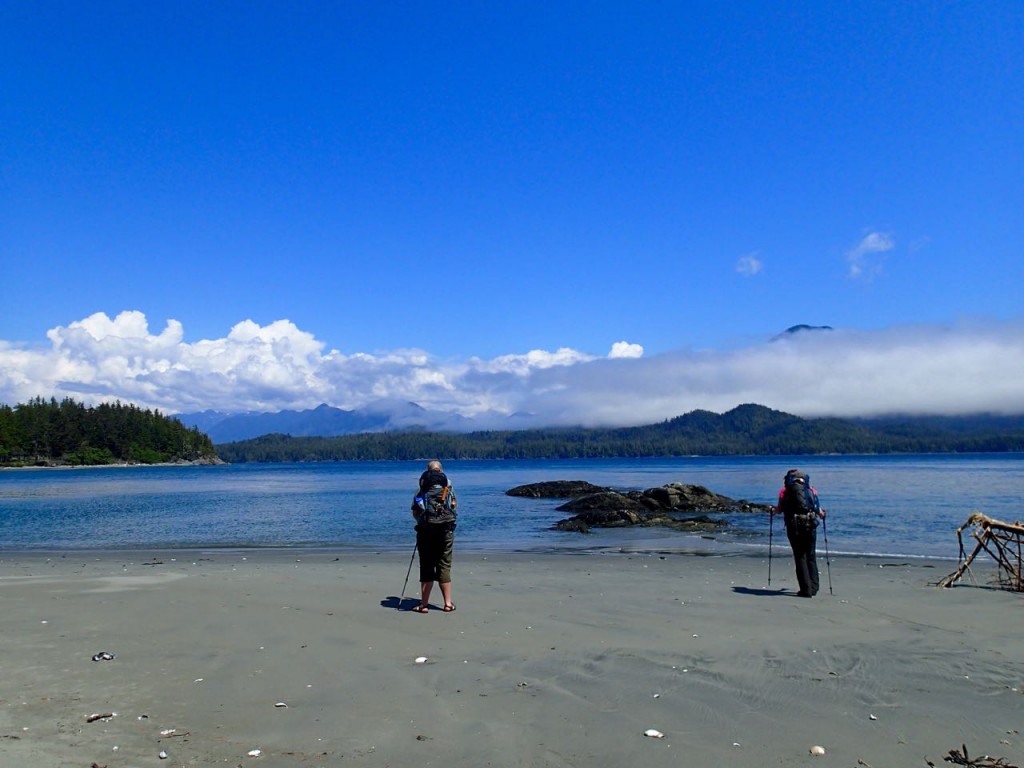 After lunch we headed back through the boardwalks and beaches to the village with big smiles of on our faces and lots of stops for photos and snacks.  We really didn’t want the trip to end; we wanted to stay out on the sandy beaches in the sunshine forever. 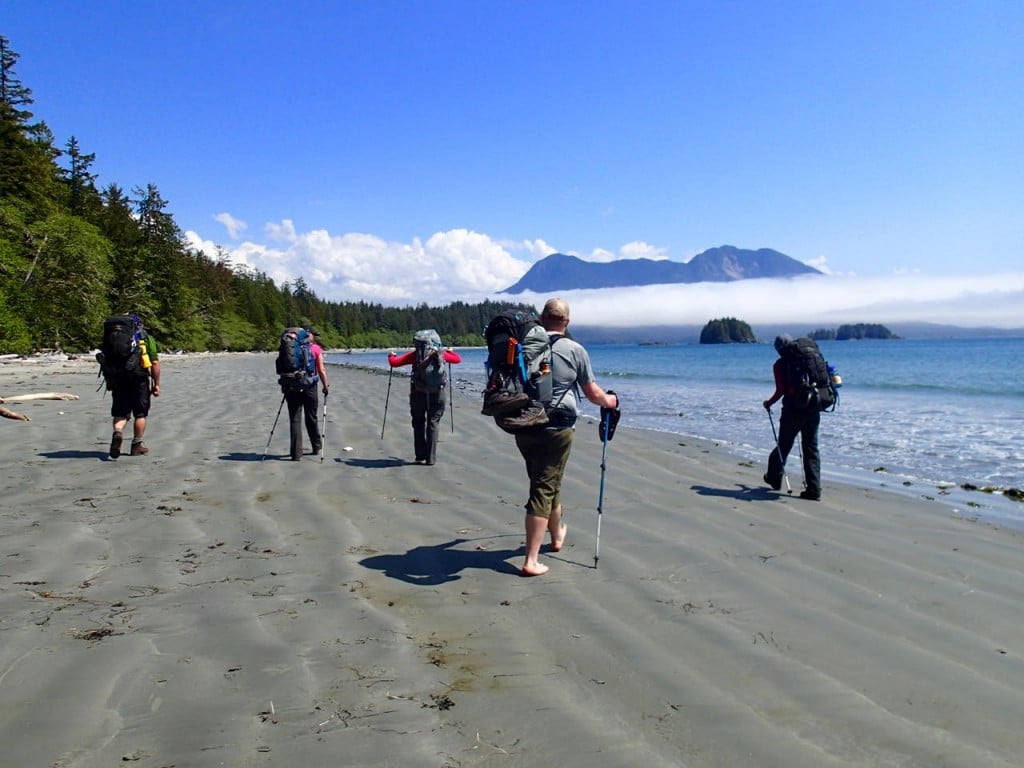 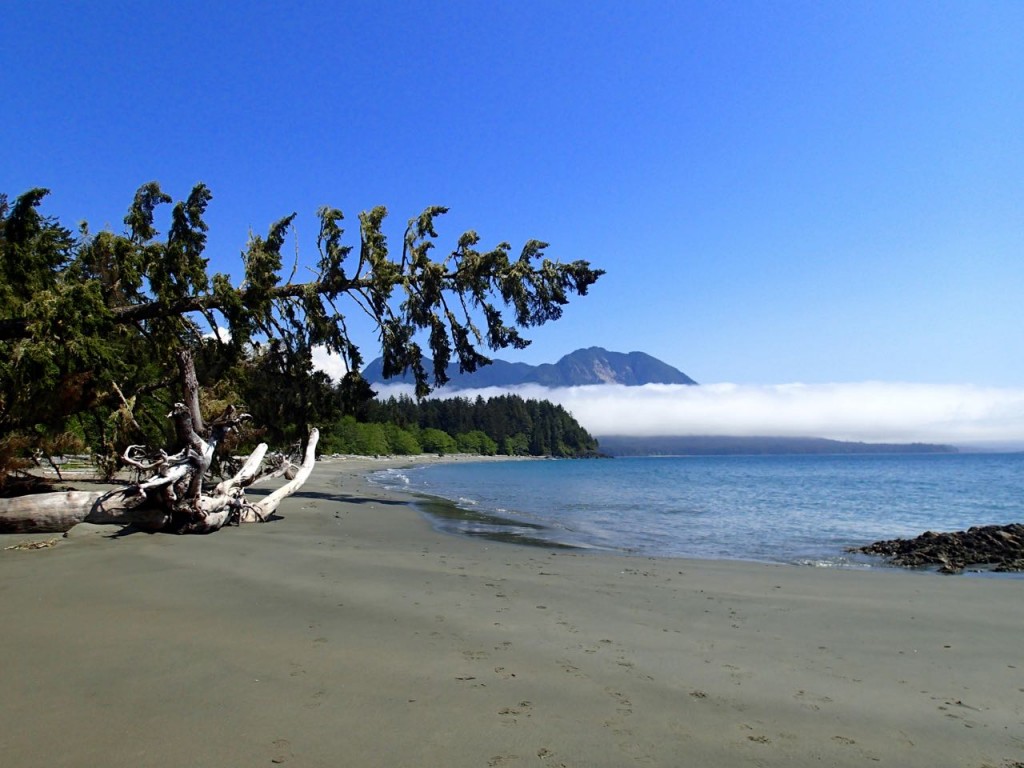 Sunny days and sideways trees on the Walk the Wildside Trail

When we got back to Maaqtusiis, Travis from the Wildside Trail called our water taxi who met us at the dock.  It was much windier with rougher water on our trip back to Tofino and there were a few “exciting”moments when our boat came out of a channel into rougher water and sent spray flying onto all of us who were sitting on the outer deck of the boat. 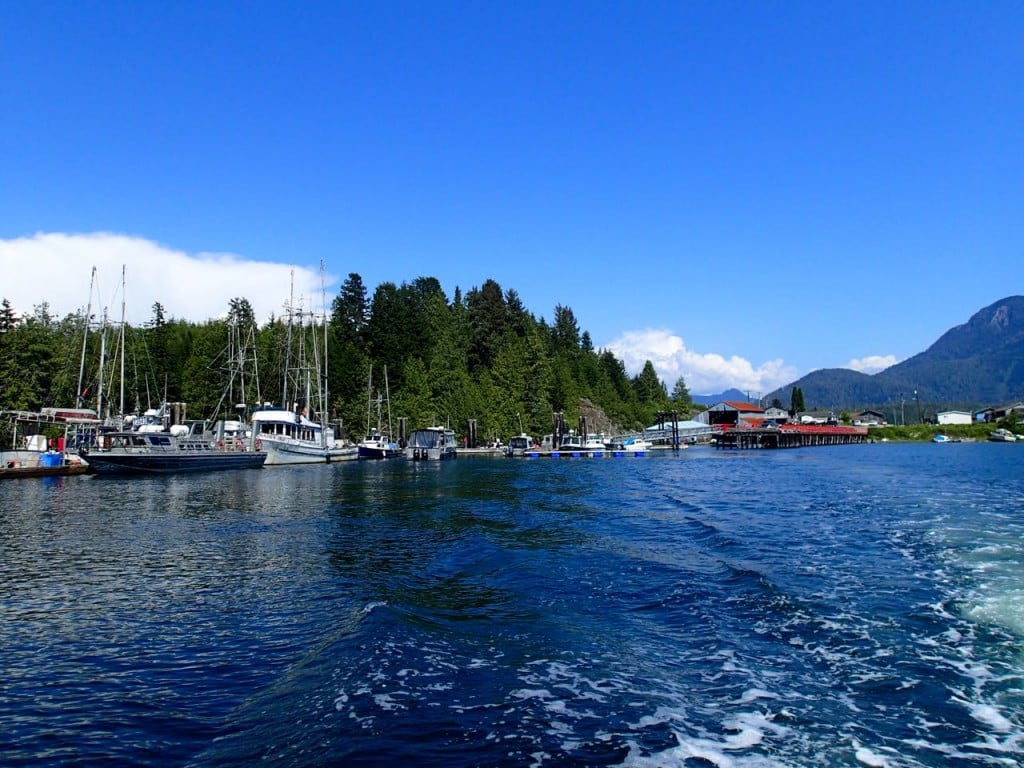 Leaving the dock at Maaqtusiis

Overall, I’d have to say that the Wildside Trail has the best scenery to effort reward ratio of any of the coastal trails I’ve hiked.  None of the terrain is particularly difficult or annoying to walk and all of the beaches are fine sand (no rocks!) with beautiful views.  The Cow Bay campsite is beautiful and well maintained and the Wildside Trail staff were some of the friendliest and most helpful people I’ve encountered when planning trips.  I highly recommend this trip and it’s one that I know I’ll do again.

Have you Walked the Wildside Trail or other coastal trails in BC and Washington?  Which one is your favourite?  Which one is on your list of hikes to do?

Hiker, adventure traveller, Leave No Trace trainer and connoisseur of alpine meadows. My home is in Vancouver but my heart is in the mountains.